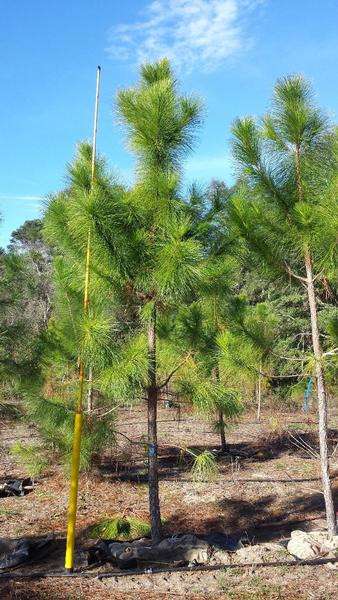 The shade that a Slash Pine provides is more open than a dense, broad canopied tree like a live oak, so nearby plants can get enough light yet with a bit of protection, too. This setting is ideal for many shrubs and ground covers. Slash pines create a natural bird sanctuary…they provide shelter to birds from predators, attract the pileated woodpecker (the big “Woody Woodpecker”), and are home to owls. Even eagles and egrets will make their nests in the treetops of a large pine.

Central Florida’s Premiere Tree Installer, The Tree Planters located in Lakeland, is your #1 source for large, rare, and exotic palms and trees. At The Tree Planters, we have installed and transplanted thousands of large trees of every variety all over Florida for over 50 years. Every tree we sell, we plant. Every tree we plant, we guarantee for One Full Year.

We offer Free Delivery Within a 50-mile radius of Lakeland, Florida (All other delivery fees will be quoted at time of purchase), and a One-Year Guarantee on every tree planted by The Tree Planters.

Slash pine (Pinus elliottii) is one of the three “southern yellow pines” that are so important in commercial forestry in the southeastern U.S. The others are longleaf pine (P. palustris) and loblolly pine (P. taeda). All three are large evergreen conifers with relatively long needles and large cones. Slash pine can be distinguished from longleaf pine by its having much thinner branchlet tips that are only a half inch (1.75 cm) or so in diameter versus branchlet tips an inch (2.5 cm) or so in diameter for longleaf. Slash pine can be distinguished from loblolly pine by having its cones on short stalks, whereas loblolly’s cones are sessile, attached directly to the branchlet. Needle lengths also are useful for identifying the three pines: Loblolly needles are generally 6-9 in (15-22.5 cm) long; slash pine needles are usually 8-12 in (20-30 cm) long; and longleaf needles are 12-18 in (30-45 cm) long. And perhaps the best characteristic: Slash pine needles are in bundles of threes (mainly) but also in twos on the same tree and commonly on the same branch; the needles of longleaf are always in bundles of three, and those of loblolly almost always in bundles of three and only rarely in bundles of two.

There are two varieties of slash pine. Pinus elliottii var. elliottii is the typical, widespread variety that has an ordinary seedling stage and normally grows 60-100 ft (18-30 m) tall. The National Co-champion, in Duval County, Florida, is 138 ft (41.4 m) tall, with a diameter at breast height (DBH) of 41.3 in (103 cm), and a crown spread of 55 ft (16.5 m). South Florida slash pine (P. elliottii var. densa) is a smaller tree, normally to 55 ft, (16 m) tall, with lower branches and a wider, spreading crown. Its needles are more often in bundles of two than those of the typical variety. South Florida slash pine is better adapted to frequent natural fires than is the typical variety. Like longleaf pine (Pinus palustris), the South Florida slash pine has a grass stage seedling. In the grass stage, the pine does not develop a trunk. Instead it looks remarkably like a clump of grass while it grows a large tap root and stores carbohydrates for energy. When the time is right (after 2-5 years or more), the young pine bolts upward, as much as 3-5 ft (0.9-1.5 m) in the first year. Like the longleaf pine in the grass stage, the South Florida slash pine seedling is protected from fire because the vulnerable apical tip is buried in the center of the grasslike clump. Once the seedling bolts up 4-6 ft (1.2-1.8 m) in height, that vulnerable tip is above most ground fires. Only during the actual bolting period is the young tree susceptible to death by fire. South Florida slash pine has a smaller cone than the typical variety, and its needles tend to be longer. The National Champion, in Pinellas County, is 69 ft (20 m) tall, with a DBH of 41 in (103 cm) and a crown spread of 69 ft (20.7 m).

Pinus elliottii var. elliottii occurs naturally in moist situations such as swamps, low hammocks, sloughs, along streams, on barrier islands and in pine flatwoods where it may be the only tree species. Historically it was excluded from more upland situations because it was killed by the frequent natural (lightning-caused) fires, to which the longleaf pine was resistant. Nowadays natural fires are largely a thing of the past and slash pine has come to dominate thousands of acres (ha) that were formerly occupied by longleaf pine. Slash pine is widely planted in commercial tree farms because it grows faster than longleaf. The natural range of slash pine was on the Coastal Plain from southeastern South Carolina to Central Florida, and west to Louisiana. Slash pine has been planted for pulp and timber outside its natural range and has become established in Kentucky, Virginia and East Texas.

Moisture: Slash pine is found naturally in moist situations (especially the typical variety), but is grown successfully on drier site.

Hardiness: USDA Zones 7 – 10. Pinus elliottii var. elliottii occurs naturally in zones 8 and 9A, and has been planted in zones 7 and 9b. The natural range of P. e. var. densa is restricted to zones 9B and 10, and probably has not been planted much outside that region.

Propagation: The seeds germinate readily and the tree self-seeds with abandon.

Slash pine and long leaf pine were once very important in the naval stores or turpentine industry. Mature trees were scored down to the cambium layer with a scythe-like tool called a hack. A container was placed below the wound to collect the dripping resin which was used for waterproofing ships and making into turpentine and rosin, both of which had a variety of uses. Today one (if lucky) can still find an old turpentine pot (called a Herty pot, after the man who patented it) on the ground in old growth stands of slash or longleaf pine. 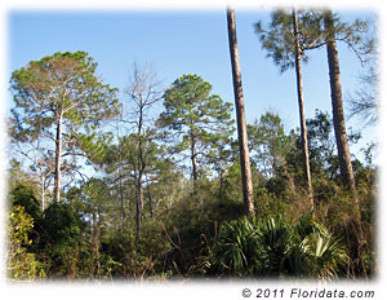 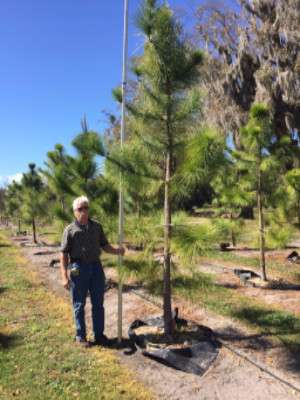 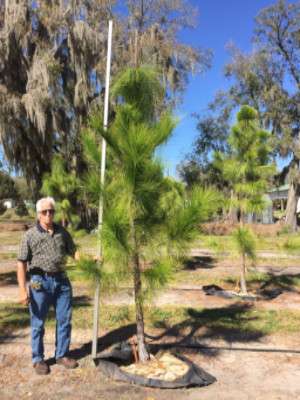